NOW...it is somewhat funny, to recap our rides of this trip to the beach. 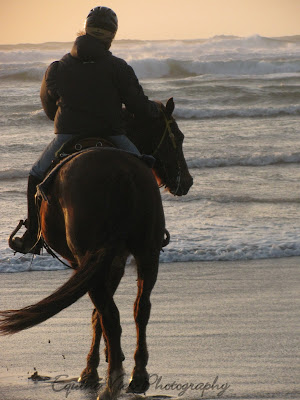 We arrived late in the day to the Bay Ocean House my friend and PBO owns at Tillamook, Oregon. We went to do a little work for upcoming renters bringing 10 horses. After the 90 minute drive, we unloaded the horses, unpacked the truck and trailer and my friend asked if I wanted to try to ride...A YEA, of course!
It was about an hour and a half till sunset.. My favorite time to ride of all times of the day! 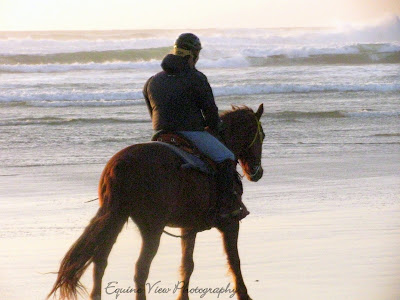 We just rode up the bay, to the first trail to the beach. We then rode around in the waves...it was a windy time this time..so we bundled up.
Oh...Found out what my Fleece "Shadow Roll" is really good for..
Waves and ripples...Wa did not shy once, while we traversed the criss/ cross waves and ripply surf! 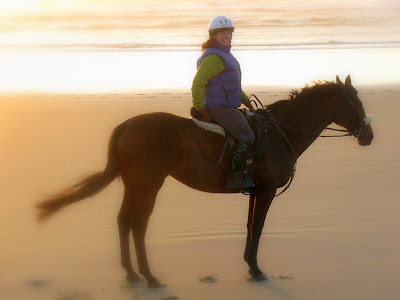 we really enjoyed riding at that time of day with our horses...Me taking photos at sunset! 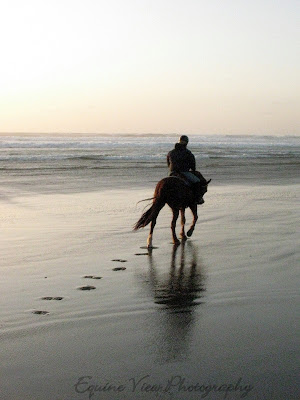 .....but the anxiety was increasing for them...I found out as we turned to head up the dune hill....
Wa Mare was rigid- and WOULD NOT MOVE forward 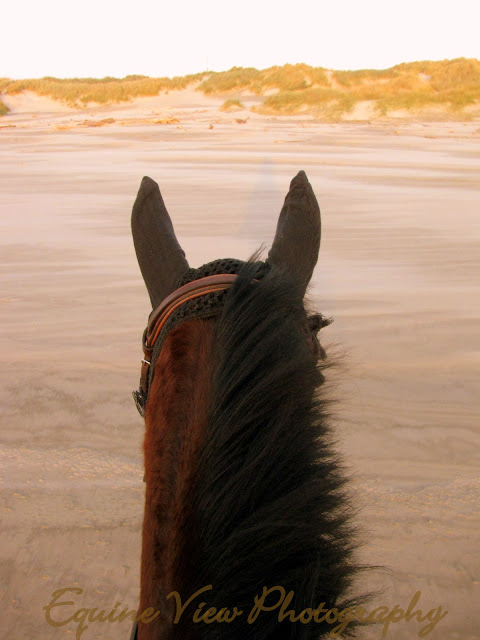 She balked and made faces at me as I squeezed her to go forth and home...it would soon be too dark to ride the grassy path back.
NOPE...not moving...okay, so I let Romeo lead the way...he balked too...but went on EVER-SO-slowly.

This was not the first time my mare had balked at the thought of entering the "SCARY GRASSY TRAIL". Many weirdo things have happened to us there, it being a multi -use trail with Bikes, large coolers held up over peoples heads.. people diving suddenly into the brush, avoiding us, and looking too lurky- hidden away..oh there are so many things! I don't blame her really...it is an unknown and always changing!
We topped the ridge and blamo...we were instantly siting upon ROCK HARD, TREMBLING horses! 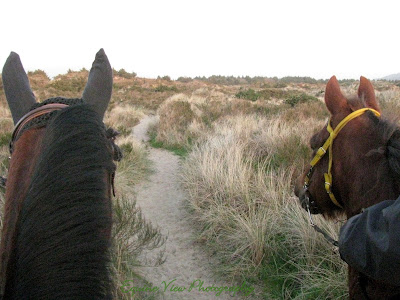 They were transfixed with something in the distance..... 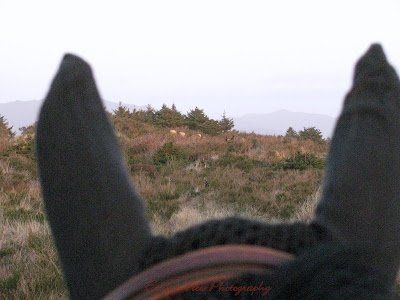 There they were ...a rather large grouping of mature ELK! 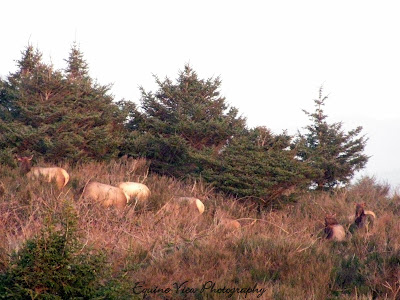 And I have come to realize...Elk are not like deer to my horse....I mean, we may ride into leaping, fleeing and skirmishing deer..no problems...she looks and sees and ignores.
Not ELK! They smell altogether Dangerous!
So we finally got the horses to moving forward...they were very round and uppity though...
Look at the picture of Wa's ear close up..the break in the trees, near the lft ear...that is the trail we HAD TO  travel home.
We got nearer to that point..I could feel the tension in my mare's back...I said aloud to my friend, " I'm Seriously holding onto my grab strap!"
Then...another Blamo....my friend says sheepishly so, "a, Kacy, look up to your right!" There they were...HUGE-O- ELK herd- looming above us...and one large bull ,with black hood and horns! Just as soon as I saw...Romeo did a complete FREAK.....jump to the left, jump to the right, then head for the hills!
My Mare Heard his sudden moves...and WHOOSH...we were half way to the trailer before I could even get her to register I was asking for stop!
This is one time..I am soooo happy I used my bit!

It totally had me worried that I could not see or hear my friend...not for a long while..I started to go back towards where I thought they may have gotten to..and there they were..her on her horse! 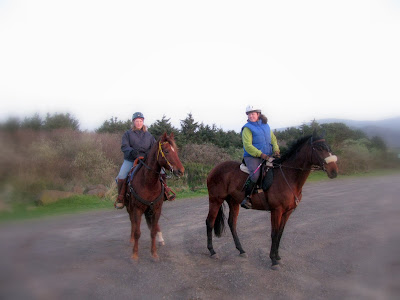 We found a dude to take our photo...WE SURVIVED the ELK!
The horses would not stand for the sunset behind us for the  photo...cause these creatures were looming in the sunset direction..watching us still! 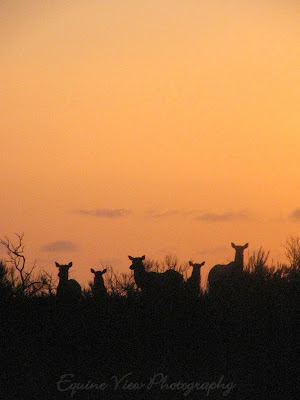