A hitch in my gidyup 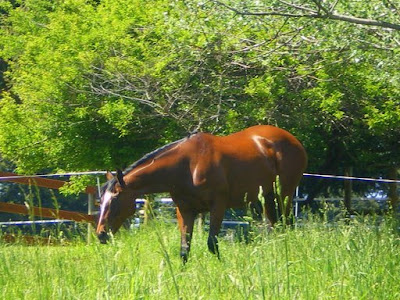 We were to go horse camping at my favorite spot in the Mount Hood National Forest..Silver Creek Falls area. Last year We had a blast on the Fourth of July. My husband Bruce was able to come . He set up three tents, made all the fires and did his fair share of cooking. It was a royal time. And, it so happens to be my Favorite Holiday with the ALL AMAERICAN MARE!
I had the reservations in March, all set..then everything went hooey and the folks that were to go could not come and though there were people that Said that they wanted to go, they never came through. So when the truck went hooey too... I cancelled the trip last Monday. Almost relieved too...strange. But, it is alot of work getting ready for taking horses away for a weekend.
. 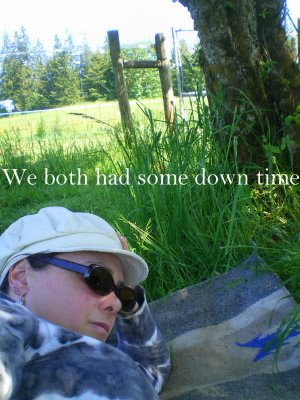 So...turns out that this is a heat wave...99 degrees folks..it is Oregon..we don't like that! well, I know..there are some that do...but not my crowd. And I did a HOT Camping trip with colic and all, last year... SO, kinda glad it all went south. AND to top it off...my mare is in a HOT Season..she is fit to be tied and is beside herself in her mare way. I am not going to ride in the parade in Mollala now either..just not a good timing!

So I took it easy mostly today, out there at the stable, ...sweat was just dripping off me, standing still practically. I did take a nap under a tree with my mare grazing nearby..that was nice.

I also got alot of cleaning out of my sissy's trailer done till -it was too blame hot to function. I gave the mare a bath..she loved it..was nice and cool. I waited till about 7:30 and got the mare ready to ride..my PBO was getting her horses ready for the parade and My mare just was having a cow over not being able to see her Romeo, So I took her to my (I love that, "MY") trailer in the shade and on the gravel to groom and ready her. She tends to stand on the gravel not liking it at all.

We went to the newly baled hay field , in view of the barn*( My mistake here) and she JUST COULD NOT BE WITH ME! She was calling to her herd and was being pissy.I was not asking for much.....but it was too much and when The truck and trailer went by, down the driveway she lost it, and turned BRONC on me! Wee ha...I held on for the first big leap, then she catapulted me off to the right side...I landed on my right knee -smakcada- and since John had full view of the whole thing I made sure to jump up throwing my hands up- so he knew I was okay...as I YELLED...LOOOOSE HORSE!!! She was off like a bullet down the driveway she knows so well....neighing the whole way . Gemma met her at the drive..she herd my yell.

SO, I saw My left stirrup hanging very LOW..probably cause I tried to stay on and it was starting to come off as I did. I NEVER lock the leather holder for this reason. But, she must have gotten her foot in it as she bolted. My new endurance stirrups! It bent the crap outa it! And also ripped a very large crack into her left hoof. I filed it and it is very uneven, but she is good.I also was able to use a rubber mallet to pound the stirrup back to working order too. THEN....I got right back on and went back to the field..yea I was scared too...but, I did lots of circles and stops and we walked the entire field. I just had to claim it back after that.

Now I sit with ice on my knee and left elbow...I took my Arnica and Advil and will just see about tomorrow's planned ride back to Stony Mountain . One of the gals that was to camp with me wants to go.

HAPPY INDEPENDENCE DAY ALL!!! It is my Favortie time with the Washashe mare as I call her " MY All AMERICAN MARE