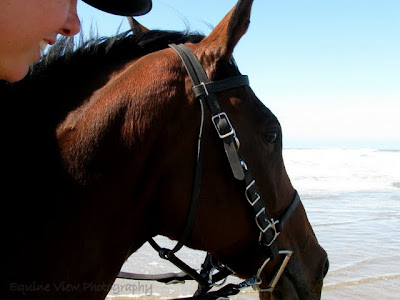 I realised that there is another thing I have in common with my mare....

While planning the end of summer beach trip this time, I yearned to have some alone time with the mare in one of the most favorite of settings I have the privilege and blessing to ride in.
Though I had room to share in the trailer for another, I decided that I would go it alone and hopefully even ride alone, this time, with her.
I have never done that at the beach. Oh sure...I have done the occasional separation move to calm her down and she does quite readily, once others are out of the picture. That has always surprised me too...Washashe being the social mare that she is. She actually gets better, while alone...even if the horses are ahead of her..if they are out of sight..it literally is almost-"out of mind" !

I can get all tied up in knots about thinking of whom I may ride with- having a sensitive Thoroughbred mare that feeds off others that are nervous or competitive. So this time...instead of fretting..I planned on riding alone.

We all headed for the beach at the same times and started together...I was wondering how I would break off without being rude or anti- social looking.
Well, each time it occurred naturally. The first ride, we set out together and planned on riding the Bay Side. I took the pains of putting the hoof boots on Wa mare. Then planned on taking them off for perfectly sandy shores, after I reached the Jetty some 30 or 40 minutes later.
I then was apprised of the time constraints of this ride, and I hate time constraints!!! They did not want to be out as long as it would take to ride to the Jetty...and I did not want to get off after only 20 minutes of riding, to take off those blame hoof boots, to ride in the sand where I need them NOT!
So..I let them all go and rode on down the road.

I missed out on the group photos, but had a fantastic ride alone..she was really relaxed and so was I!

The next time out, we were all just naturally separated, by leaving at different times to hit the beach. It was a higher tide and everyone did their own thing. I again had a nice, fun ride with a bit of galloping and trotting in the surf , with the mare. Trotting in the surf really makes for a buoyant, lofty and round horse as they are looking at the ripples of rushing water below themselves! I loved it!

I then discovered, that the other thing we have in common is: we are peace being alone and enjoy less pressure. Groups can make us nervious, and we tend to separate eventually for more solitude-

Though -this being said-we are social in our heart and love a few trusted companions that are longsuffering with us. 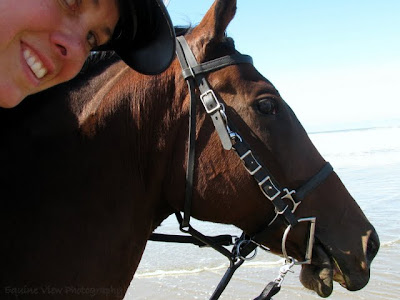 Posted by allhorsestuff at Wednesday, September 23, 2009

Email ThisBlogThis!Share to TwitterShare to FacebookShare to Pinterest
Labels: Solo self photo's