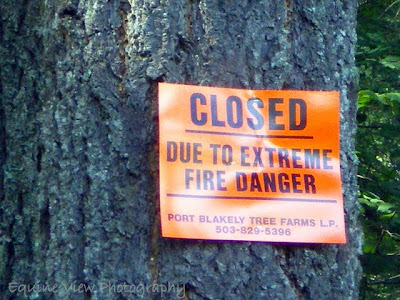 As of the the month of August, the Local managed forest lands have been closed. It has not happened in years..but this year we have had some long stretches of hot weather. Normally, here in Oregon, we get rain at least every other week, if not some every week. Even if it's the overnight showers, that so nicely clear the air and make it smell fresh again. Not this summer!

I was NOT riding much at all in August, due to my crash and it bothered me not that the lands were closed. Recently, I have wanted to ride the lands again, so I rang up the local land manager . He was not really willing to budge...even for a barefooted horse. Though he said that they could not enforce it and many would still be going through the trails. It is already illegal for motorized vehicles and shooting, hunting and campfires. All it leaves is us Equestrians and the hikers and mountain bikers.
While out on the trail with my Friend last Friday, the horse started to neigh...not ours but my phone's ringer! It was an old riding buddy. 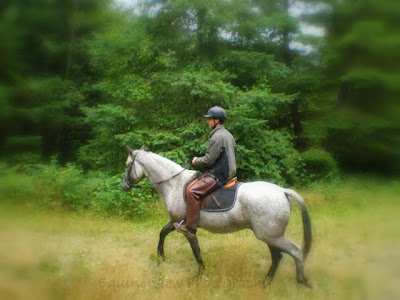 I normally do not catch any calls-on purpose while riding- but this was a friend I had not heard from in a long while. He wanted to schedule a ride..we did for the next day, at my place. I called around some more and found that BLM land banked up to all the Port Blakely lands around us. They have NOT closed thier lands. I made sure to pass through the P.B. lands that had no signs up(less guilt) and we rode to the BLM lands. 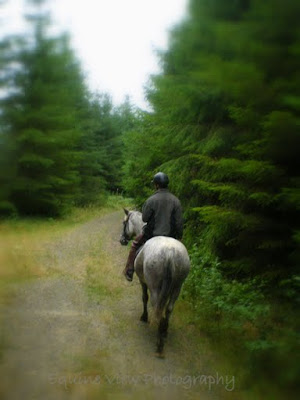 His neato horse Quincy is now 6. He spotted him in a field one day and drove up the driveway and asked if he were forsale. He was. He bought him within weeks, and started his groundwork training. He had had 3 horses before Quincy and they had some training issues(like Mine...(wrongly mishandled and now sour to work) He desired to train his own horse, instead of buying others problems. We met through the Christain Trailriders Fellowship almost 4 years ago and have been riding together ever since.
Sometimes I ride Jag, His QH. While I was in a barn that had trails my second year of horse ownership, he'd come every weekend with me. My Wa mare loved to lead and his 4year old Quincy would not...perfect match till Quicny got bolder and my friend would then take off on us...made for a crappy ride and after a few rides like that...I vowed not to ride my mare with him again. 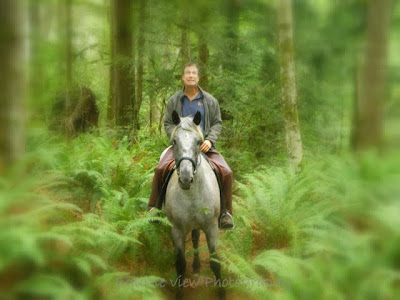 Okay..he is really a nice looking man but...he took his helmet off saying, "So I won't look like a dork" he explained...then he looks like a DORK anyway! Weirdo face!!!
Sometime...I will tell some of the really fun stories of our riding heyday back when I was a bit more fearless. I found out he nicknamed me "Wildwoman". Tee hehe!

Nice times...are soon to come to an end though. He just took a Job in Rockwall Texas and is to move the 27th of September. We have a few more rides scheduled, then He's off!
Posted by allhorsestuff at Wednesday, September 02, 2009

Email ThisBlogThis!Share to TwitterShare to FacebookShare to Pinterest
Labels: Will miss my riding bud