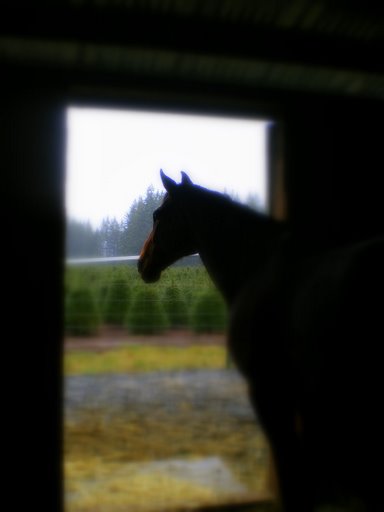 We had a great time away  for our Anniversary but I also came back to tons of work. Being self employed is like that...the work waits for you. I was not able to get out to the barn till late Saturday, and then stayed only an hour or so, till just after dark. That made about 5 days away from my mare. Might not seem like much to some-but for me- it is 3-4 days longer than normal.

I had been informed that Washashe did not eat her grain, which is HIGHLY UNUSUAL.

I also noted while there, that my mare had only eaten about a flake of hay- from her assortment of 4, over the nights time.

As I walked to the field, she saw me and whinnied...which seems like she may be happy to see me, yet actually, I know it to mean that she wanted to be rescued. She was alone in her field, as Romeo will eat all her hay, which he does not need, and she will let him.
I brought her in and she was very laid back. More than normal, so I decided to do all her vitals.(save heart rate...need to buy a stethoscope) Her respiratory was 12 BPM, and the temp was 100.1.
She had cool hooves and refill on her skin was O.K. a bit dehydrated , I thought. Her urine was far too dark  as well. I listened for gut sounds on both sides and they were there... low girgles and not high pitched ones.
I noticed she was a bit
bored and would go out and nibble on what used to be her favorite snack in the paddock...the thistle. My PBO had srpayed them a few months ago, agaist my will, and had left them there to wither.
So I decided that maybe since she was spending much more time in the paddock with the fierce storms we've had and the dimished light as well, she may have been eating them and gotten a sour stomach. I was told it snowed 2 days as well, while I was gone. I have heard that horses sometimes drink less water when it is soo cold.
I spent an hour with gloves and hoe=ripping  the remnants of the thsitle out. 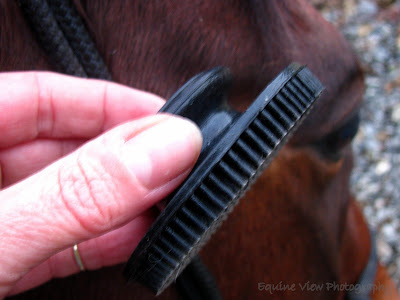 After I did that, I  spent some time grooming her and making sure she knew I was loving her. I broke out a gift my sister had given to me for her.

It is this little soft rubber,circular brush. She normally does not like her face brushed,but with this little gem, she allowed me to really brush,all over her head/ears and treated me as if I had  taken off her bridle and just really leaned into it! 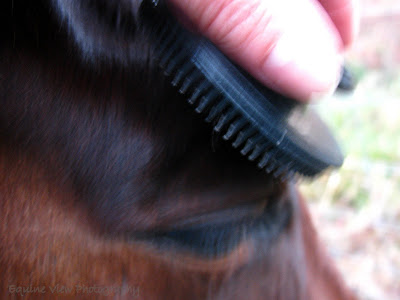 She closed her eyes and I could even go over her boney areas.

SO, I put her to bed and decided to come back early the next day to see how she was. Before I left I gave her a scoop of the Beet Pulp I soaked 4 hours earlier...thinking..if she does not eat this, I am calling the vet out! (I forgot to mention..she would not even eat apples!)
She was very happy to get that ration. I only feed Soaked BP in the extreme winter, when she may be off her water or in the hot summer when she is working hard for longer rides. The vet recommended it for the Hind Gut Moisture once when Pantz, my sissy's mare, had collic'd.

I got there the next day and she just stood-listless- in her stall. She usually greets me by shaking her head and wanting a treat . So the uninterested mare, was not a good sign. She also did NOT eat Her hay much  and again,  had left her grain.

I took her blanket off. It was a bit warmer after having snowed a few days earlier.
I detected a bit of sticky hair above her hocks and wondered if this could be a season?
Well, I was worried now,so I stayed with her, for  hours. I kept her and another horse in the barn..
She then began to eat and drink increasively more, to my relief.   I went to the tack room to fetch the other portion of soaked Beet Pulp, and she nickered at me as I came to the stall. Things were looking up suddenly. She had about 8 poo's in the stall and 2 in the paddock. I watched one come out, as she was so kind to poo in front of me. It  did look a bit "greasy". My sissy told me that if they are extra slick, it means that they have been in the horse longer.
I then thought to change all her grain packets to a more simple configuration of oats, rice pellets with Raspberry leaves + vitamims. None of the other supps I normally give her. I also put a 30 gallon water tub, in the back corner of her stall, thinking it may stay a bit warmer in there.
After staying with her and then hand grazing her on some longer,wet grasses I called it a day.
She has increased her normal patterns since then and I feel that,  trouble may have been averted.
In a months time, I plan on taking a fecal sample to the vet for analizing...gotta make sure my dewormers are doing what they should too!
Whew...I just hate it when animals are off...they only have actions to talk to us with, so you have to be a good investigator!

Posted by allhorsestuff at Friday, November 20, 2009