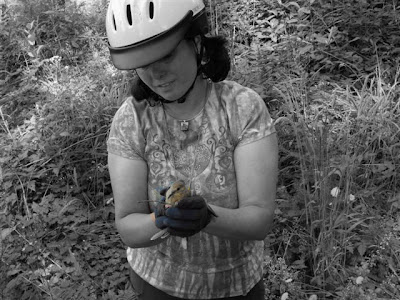 Remember the ride with all my girls from the barn? Click if not-

I will tell you about the fluttery happenings of that day and more now....

My PBO just sent this picture to me, I had wondered if it had come out.

On the first leg of the ride, where my mare surpassed all of our expectations by being a great Lead Boss Hoss and also a follower in the same ride, we came upon some baby DOVES. They were not able to fly as yet. 3 of them scurried into the bushes beside the creek and this one, it just kept fluttering ahead of my mares hooves. It was directly on the trail and I had to stop for it many times, as it would get all tuckered out from the pursuit.

I finally dismounted and handed the mare over to someone to hold. I then gave actual pursuit, to try and catch the little beauty and return it to where it's siblings had remained. It of course did not realize my good intentions and tried to flee. I am sure it's little heart about gave out -for the fear- as I scooped it up in my hands and quickly walked it back down the trail to place it near the place it started to flee.

On the way back home that day....I took another trail home and some went that same way near the creek. The foursome sibling flock were right there on the trail again....yet this time they all scurried into the bushes-together!

This does bring to mind many incidences of flying, feathery occurrences, up where I ride. A couple weeks ago, we were on the way down from Stony Mountain and flocks of very large creamy -grey Doves would fly out of the tree tops, just above us and into a nearby tree grouping. It happened over and over again as we came down the road. We all were silent and watching this..it was amazing. I have NEVER seen so many Doves in one area ! It was a DOVE CONGREGATION ! They are the neatest birds..as they fly, and they fly fast, their wings actually whistle!

Last weekend, as I finally discovered a very nice loop, off the Rockwall trail. I was riding Danny for only the 2nd SOLO ride. He is a follower..he checks out and does just that -FOLLOWS calmly-keeping his ears almost pinned listening to you. 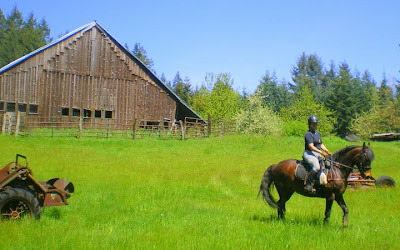 Well the first time I took him out SOLO..he about had a Cardiac Attack at every little thing that moved and mostly things that did not!! I like how "Horse of Course" puts it..us "two-legs" just ask far too much of the four legs... there are leg eating logs and such in the paths we ask them to take!

Well OL' Danny Boy is such a good boy..he gets all freaked with something and All it takes to get his mind back quickly-I discovered- is a tingle of something in his eye's view. Something like a branch with some leaves remaining on the end, so it makes a rustler noise, if shaken. Or a dressage whip held out in the direction- he thinks he shall escape in. He responds nicely to suggestions like that..I never touch him with any of it.I just ask him to move forward and lightly rub his withers in approval, in advance. He is beginning to trust me more and more.

So...we were discovering all sorts of leg eating monsters -yet-he was still willing to move ahead. We got to a patch of brushy trail and OH MY....Flutter-WHOOSHING -and a very clumsy chucker-grouse or-?-Flies out and Danny almost flattened to the ground, I swear. It does give one that adrenaline RUSH...I dislike......then Another, and another!!! 3 Of them, in a row.

I was still on and he was still standing, though braced. I laughed and started to talk out loud..helps me breath again and calms the feeling rigidity in my body to the equine under me!

Then again...3 more, on what seemed like a timer....he did not stop this time...then 3 more, 20 paces up!!! I was soo laughing out loud and he was not even fazed by the last set of 3 clumsy birds that fly-scuttled from the underbrush!

It was an all out assalt on the sences that was perfect for us that day...get it all out- right now like! We found the loop trail to Stony Mountain too! 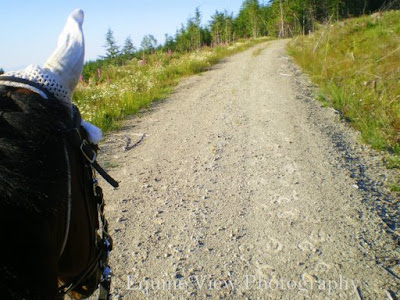 Posted by allhorsestuff at Wednesday, September 16, 2009