Rider off and horse down- round 2 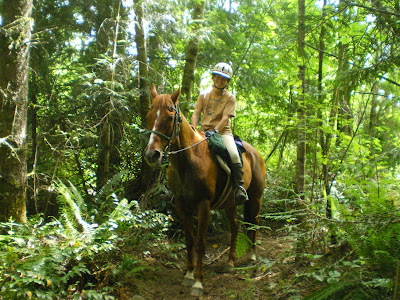 The hill down to the creek is steep and narrow and really uneven going.....not at all what I like to ride on with a not-so-nimble mare like mine. I get off for the decent, the last bit, and remount for the creek and then dismount again for the bog area. I had done this and we were going to try for the bog after we watered the horses in the creek..my mare would have none of it and jumped out..up a steep embankment ,though I was waving her away from it..she would have none of my advise.
It had been a day like THAT today..she was uppity with a new mare to ride with though the mare stayed way away from her, not crouding her at all....she kept her eye upon her. She was balking at some places too..not normal for her..but she does hate some of our passages and today...she told me so!
We actually were on the way back..forgetting the bog today..I mounted and headed for the trail up...she does okay with walking it up, but she wanted to trot it and I was in two point to stay with her...THEN=she tripped, and since I was already in forward position, I whipped over her shoulder to the left bank and as she came to her feet, I was still holding the reins , and the tension pulled me under her...OH-MY- FREAKING -STARS!!! Life flashed before me as I looked up at her belly and hind legs.... she fortunately-jumped over me and headed for the top of the hill!
Man...so close and such a blessing once again..to have God's mercy!
I started up the hill and my friend rode behind me...she kept trying to get me to get on behind her , on her mare April and I finally did at one point and that is when i felt my back ache..ooou.

I did not last long..but I did last to see some walkers on the trail ahead and they actually had been called by a nearby Nurse that watched my mare WHIZZZZ on by= with out a rider aboard.
I thought that was sooo awesome that some one would have come looking for me!
Apparently, he had been "rolled" over on by his horse last year and had to ride back hurt..so he sympathised getting the call about me and brought a little motorized thing along to carry me back to home, if needed. I thanked him profusely so and we kept right on going..I was nervous about my mare crossing streets(she probably did it in a "single bound" though, knowing her)..then there is the clear cut area right before the house..Oh..I was thinking of her falling into a root wake or empailing herself. I had to get off that mare..it hurt to badly to ride behind the saddle..and I mad emuch better time on foot!
She was there! Washashe made the (?) miles trek home crossing two streets and making various turns in the trails to get there...and she was not even hot...jsut standing near the other horses ,in the yard.
WHEW! Not a scratch! I am so amazed with the GPS system this mare has!..Well, there are some places I dare not even ride again..I will be on foot with her!
As I drove home..I went on over to the property owners house that had called to find me help. She is a horse owner and the building I ride by every time I go out, is an ARENA! A nice one too..they will board horses this winter and I am already going to do the gals hair soon and it was such a cool meeting..I really wanted to thank her for caring enough to send someone ointo the woods for me!
I miss Pantz! She was so sure footed!
PS..Got a question for you all.....
Be honest now....if you came off your steed out and about on the trails...would he or she stick with you? Or bolt as the horse in the last post did ..and now unfortunately- mine too. ???
Posted by allhorsestuff at Wednesday, June 03, 2009