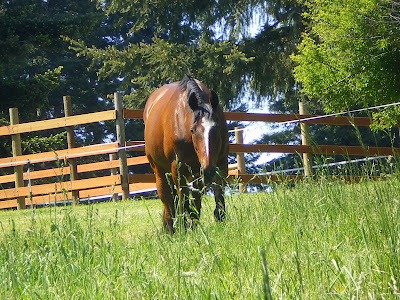 Last weekend was eventful and not at all what I had planned.
One day..I took a nap in the grass as my mare grazed nearby..that was neat. She came on by to investigate at one point.

I had actually thought/planned to ride with a friend, here at my place, one,maybe two days... and that fizzled. Soo.... having to do my chores for my PBO, as they went out of town with 2 outa 3 horses, I made it to the stable by 7am each day to feed. And then onto working at the salon and back to feed + ride till sunset, as I do love, in the Pm's. Greeting my mare in the morning is great too! She whinny nickers! I will try to get this on tape sometime..it really makes my friend laugh as she gets there to feed in the am's!

I made plans to ride an evening ride,with the gal that stays at the house of my Barn owner...she is a novice with lots of potential. She loves to go out and I love having a built in trail partner!

Panna, the older Morgan mare, is who she usually rides; but they took her to the beach this time since Danny can be unpredictable for inexperienced riders. We thought to chance it with a walking ride only . We had a lovely time out but he would like to catch up with a hop forward and a hard mouth with head held high so as to avoid bit accountability. I made sure to stop and not get ahead since she really had difficulty with this. ON the way back is where it got dicey..not for my mare until we came across the street and Danny leaped over the ditch and his feet slid out, for he has metal shoes on. My mare got agitated with him and became a bit high herself. We had another downward bit and it opened up to a tree farm. I came to the opening and went to circle Wa and my friend went to do the same,but Danny became very ill mannered and fresh...reared,then spun and just catapulted his rider to the ground...she hung onto the reins yet..to do so longer would have meant he'd maybe step on her..so she let go...and GO-GO-GO -He went!

I bolted right off my mare, at this point,as she saw him running away and got EXTRA LARGE!She calmed after he got out of visual range...I immediately started to pray that he did not injure himself on the run he was having homeward bound..We had to open gates to get where we rode that day, so finding the same way back was out of the question and meant...stopping and hopefully not going through a fence or getting hit by a car going to the road. OH!

My friend was sore,but nothing broken. I was praising God for the mercy! I remounted, told her to walk to the road and wait for me..I would go home and get the car for her. I trotted mostly back and hand galloped for stints...made it back in record time and there he was...standing there,heaving very hard! he was a mess of sweaty horse...but not a scratch and I was sooo thankful!

I got the both of them in a stall and quickly went to rescue my friend! There she was hobling along...I gave her Arnica and Advil ..and rubbed her back with a topical Arnica.She was pretty good the next day and I think we were very fortunate...and I also think DANNY BOY gets to go out agin with me and many others soon..to get him over his spinning,bucking,rearing thing!

More on this soon!