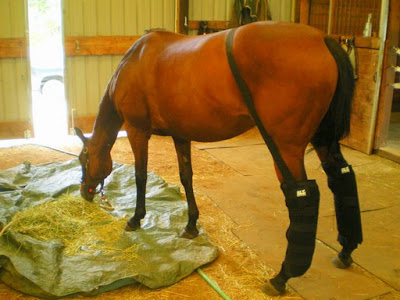 This is Wa mare with an "Ice Horse" Therapy rig on...it works very well for heat and swelling reduction. I am soo glad that we got the fridge in the tack room now, as my Ice was all set to go for this emergency. Though I only needed it for the one leg this time..the balance of the strap over the hiney held it in place. She totally wouldn't move either! It was hilarious...frozen.
Today, I also figured out how to get her to step onto a tarp(a dreaded thing) feed her on it!

Man do I feel like a jerk of a horse owner right now! I went on a trail ride yesterday with a new horse..and what was I thinking??? I failed to put the shipping boots on-ONE TIME- and this time, the new horse stepped over on my mare's hind leg!
When we unloaded the horses, She was picking up her left hind and kicking it. As I groomed before the ride and I then saw the slices into her tendon area!
Sick to my stomach, I became instantly.
The gal that was new had just the right things for Wa as she is a Naturopathic nurse. We gave her some Arnica, and put powdered Golendseal into the wound. It was clean and had not affected her gate at all..I walked and walked her to see if she had issue, and she did not.
So we did walk the trails. It was nice.
Today though..my PBO called me in the morning to say, that it had swollen quite a bit and I rushed out there to see and make vet arrangements if needed. 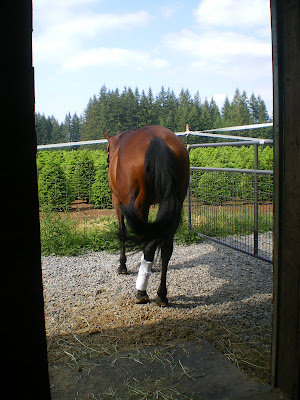 I deemed a call was in order and they offered me a 3 pm...so I waited around all day tending to the duties I had to do...make feed packets...cold hose...make more feed packets...graze and cold hose. I was making sure NOT to get the water on the actual wound, just on the hock and fetlock and other side of the tendon. After I iced and cold hosed and walked her up and down the driveway and over to My PBO's house while grazing her...about an hour or so...I then wrapped it up with a standing wrap. My first one.
This mare's legs are so not typical..they are petites! I found that the neat standing wrap batting I bought years ago, for such an occasion, were so dang huge on her! I got the kind I may wash after use. It came off her leg like 4 inches in diameter! I am going to have them cut in half and have four- out of two! So I had cotton batting too,and that worked fine. 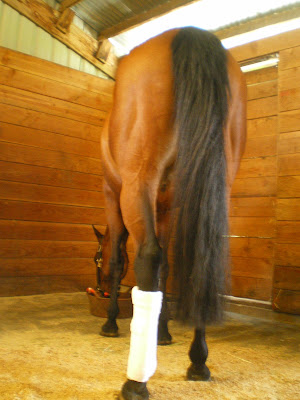 The vet called and we talked it over and since some of the swelling went away with walking and cold therapy...we decided to see about tomorrow...the Radio graphic machine was out till then anyway.

Hope and pray tomorrow she looks great! I will have to cancel my entire day out to get her there by 3pm.

I gave her 1 gram of Butte and more Arnica. She got dinner early and I came on home...

Email ThisBlogThis!Share to TwitterShare to FacebookShare to Pinterest
Labels: I knew better