Our Fare well Ride of 2008 was just about as blustery as it could be for us without knocking us both to the ground. Most of our trails were redecorated either with water, as see here, or by remnants of our white powdery Christmas gift from the sky. 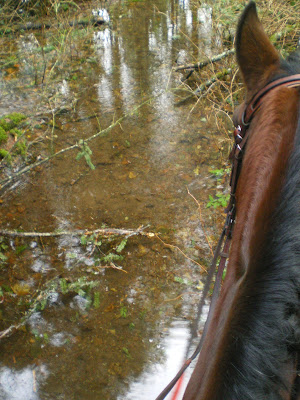 Some thought me crazy, yet, I had to go. Pantz just left, and my sissy was so late I did not get to talk to her, at all, and that bummed me .
The trail and wood called me to it's solitary places deep inside and far away from where I was...promising to give me new insight and strength.
My mare met me at the gate with head hung over the electric tape that apparently, was not hot. I think tree limbs and such must have severed the connections . Our wind and rain storms have now replaced the snow, of late.
We bundled up, me and my mountain horse jacket and my mare in her fleece quarter sheet. Down the path we went with the wind to be greeted by a raging creek where once, was none. We forded the wet rush and up the first hill to find white remnants , spattered randomly . 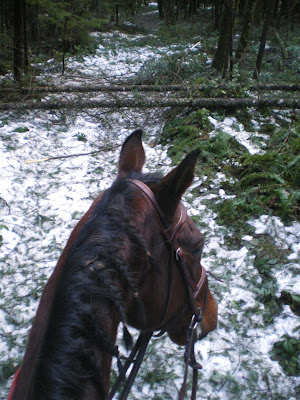 Redecorated trails for New Years ! Paths of fresh forest greens smelling lovely. Natural Cavallettis, strewn throughout our once familiar paths. Once, as we walked through the thickest part of the wood a tree, that was destined to fall as it was half way uprooted, decided to come on down as we passed near. 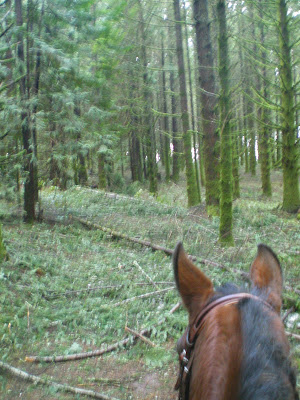 That was a bolting shock for me ,as Wa made sure we were not the final resting place for it's trunk!

All in all, it was a nice ride. Us, sheltered from the wind inside the forest thicket. My mare not having been ridden or having stretched her legs, but a few times in the past 12 days, really was entreating me to let her rip..but, I feared the slick ground and massive debris, would have claimed one horse and rider!

Home again, we decided to go meet our New Years Pasture mate ,in person, as she was moved to the lower paddock of Wa's field. 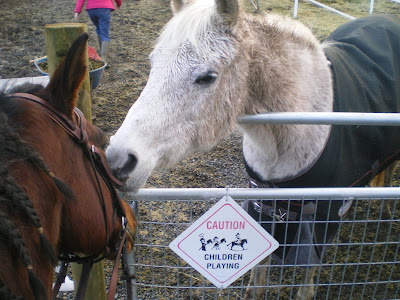 Bug, kissed her new friend's face sweetly and Wa returned the gesture. This older Arabian mare has been pastured below my mare for the past month.

I was pleased that Wa received the mare gently and I sensed that she respected her. And she did the darndest thing too....she began to nibble on her nose, ever so lightly. It was endearing, to be sure.

She said to her new Grey mare..let me nibble on your nose!

Posted by allhorsestuff at Saturday, January 03, 2009