Today at the stable was NOT AN INDOOR RIDING DAY. There had been a posting that a work crew would me making a ruckus on the roof for 2-3 hours..then it got amended to: 9am till dark.
The stable sustained major damage to all the gutters when the icy snow slid off the roof...literally took them down and mangled them . It really was Such a beautifully devastating snow storm. And What is costly and unexpected for some; is making a good living for others...as the crew told me that they could barely keep up with the demands right now. This is what I had to ready ourselves in...they were directly over us, as I checked out to see if Washsahe could handle the commotion.
She did okay for a time...but once the men started to walk above her...it was all over and I couldn't see me trying to put her hoof boots on down by her feet and and stay in one piece! So we improvised outside of the closed in groom bays. Wa was perfectly calm once she was not trapped . There was not another person there, but the owner in the office. She did come out once and was surprised to see Wa tied across the hall, and not one of the 4 groom bays...I explained the danger for me, and she passed by the mare . 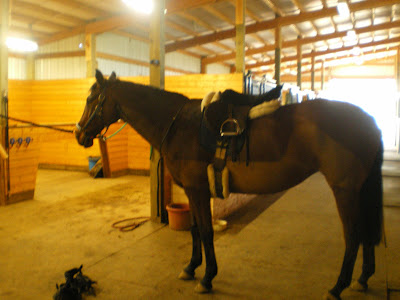 The ride itself was lovely in the Foggy into sunny day. It is higher at the stable so all the fog of the drive melted away as I topped the last hill to the driveway.
I was in awe with the sight of our valley view the extends itself towards three large mountains and the sky scape's of Portland Oregon . Today...just a white heavy cream was laying deeply across the whole valley as far as the eye could see...small faint peeks of taller tress was all I could grasp through the sweet thick moistness of white foam. I kept gasping aloud, it was fantastic! 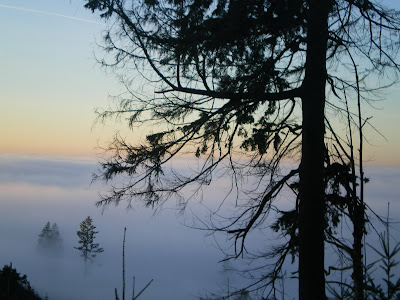 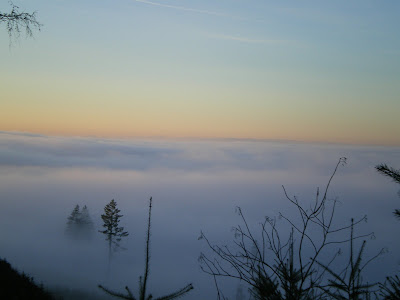 Posted by allhorsestuff at Thursday, January 15, 2009