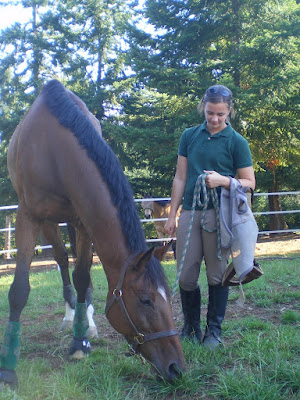 Well, our planned schooling(with another) is being interrupted already! Vinnie here, our Thoroughbred Jumping Counterpart, was barely able to be walked into the stable yesterday before his scheduled lesson. I had my mare in the grooming bay and heard a commotion and stepped to the aisle to see him walking, without bending his knee , and with his leg actually straight out in front of him . It was painful to watch and my friend and he spend half of the summer 08' with his opposite foot/leg off..so she was holding back on the fearful tears of disappointment. The vet came out and they really hoped it was an abscess over anything else...today, my friend called me to say..they think it is an abscess because of the relief he got with shoe pulled/foot soaked/ poulticed overnight/ with standing wraps. Today, at 6am, he was walking well. Yea...hope this is true...and she said something interesting to me.....I have noticed my mares frogs are diminishing a bit concavely...no heat no smell, no black ick..just smaller. Yesterday I noticed a slit like scratch on Wa's Coronet band. Thought nothing of it but to put some of my favorite cure-all on it "Schriners" herbal spray.She told me that absesses can come on quickly and also release, just as fast sometimes through a slit near the band...as Wa's. I looked again the next day, and could NOT even find it! Interesting. 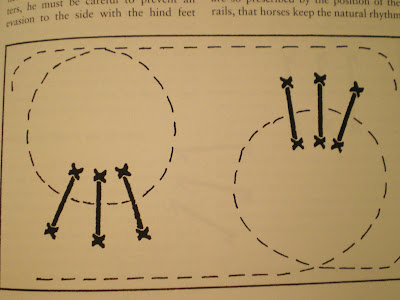 SO-My goal last night was to set up the Cavallettis after I groomed, with mare loose and following me as she normally does. I really don't expect too many folk to be around..and if they do come out tonight, I will just lead her with the lunge line and set up...she is good.I plan on doing the above pattern.. (with a twist...one set will be 4 cavs.) After I lunge in both directions freely(no side reins) then with side reins attached. I was with with another "unexpected" bout of work at the stable when I arrived...so I got to the setting up later than normal...and someone did come to ride...so my configuration changed somewhat for their convenience. It was crowded but we made it work.
From Reiner Klimpke's "Cavavlletti" book: Remember that the horses that is to go on a circle and that the inside rein must be shorter than the outside. The correct length will be about 2-4 in- about three to six holes shorter. The function of the outside rein is to control the inner bend and to prevent evasion through the outside shoulder. Side reins are fastened, as for work on a straight line, to the girth under the saddle flap, so that the the horse may stretch his neck forwards and downwards.Therefor the length of the reins is adjustable, and may be altered during the lesson."... The author does not recommend doing more than 20 minutes lunging over the cavallettis...broken up as :1o min at walk/ 5-10 minutes without side reins/ 5-10 with side reins, not over rails/ then 20 min of walk and trot over rails. Finishing is to be without side reins. "I do not recommend more than one such lesson every eight to fourteen days because the exercise over ground rails has to be included within the whole training programme and if carried out more often would prove to be too strenuous for the horse."..." The advantage of lunging a horse over ground rails lies in the fact that stiffness in the neck and quarters can be eliminated. Through the position of the horse's body on a circle, the inside muscles are contracted and the outside neck and back muscles are stretched. The inside hind foot has to take more weight."...After a warm up session walking over a few single polls and then lunging over 1, then 2, then 3 , I put the 4Th one down and we did about 10 minutes both ways walking . Then I set up for trotting and did about 10 more minutes. 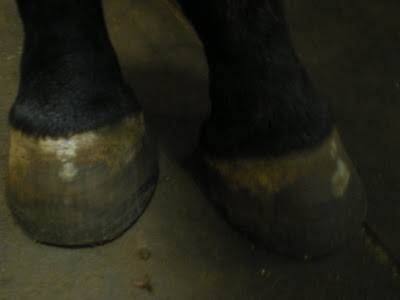 She hit her feet a few times, and I had to readjust the Cav's(marks seen on feet ) and got kinda upset at first...then she settled in and we did a few minutes of trotting video before taking the side reins off and walking out for 10 minutes and me taking the polls down. 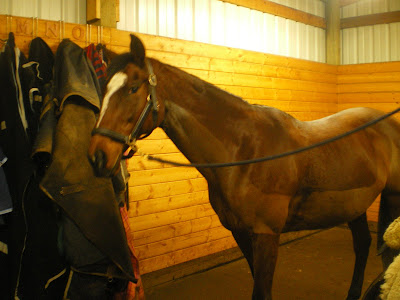 Washashe is doing much better in cross ties...She was so claustrophobic there at first, I was unable to groom even, for her anxiety. She does well alone now , she trusts the general area more and can relax. At first, there was a horse in the stall behind her and it would put its nose up to smell and she could see it...bad, she could not relax. She still does tend to pull to see if she may free herself if I turn my back...to get the camera in this case! I call her "The creeper"...as she creeps ahead -slowly so-one step at a time! I usually quick tie one fast..so she does not get all the way loose. It is a rule of the stable not to leave a horse unattended in the ties, as well as being standard for me!

I SURE missed my partner last night...it is a lot of work setting up and tearing down alone!

This Video is missing cause it refused to upload...so the next post will be a "You Tube" of the missing video!

Posted by allhorsestuff at Monday, January 12, 2009