Lovely day for a ride 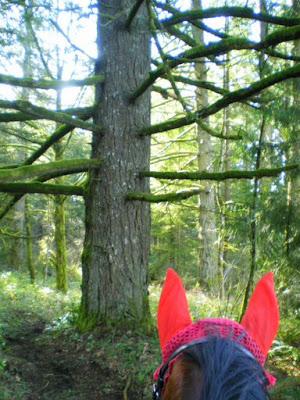 Well...yesss, the weatherman was right about it getting sunny and 55 degrees!
So we headed out on past my new favorite tree...that has elephant trunk sized and larger lower limbs that stick straight out!

And we technically are in the foothills so there is still snow on some of our trials..it was pretty. 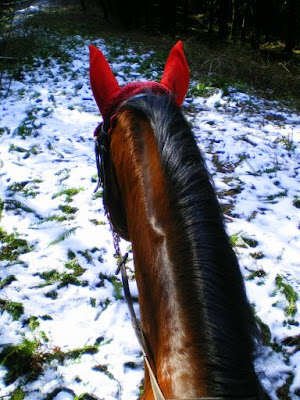 LOOK what I found today....a rather long and perfectly packed and flat roadway system. It has 3 or more directions. Some hilly and some long a flat, like this one.
I was just yearning for a place to set up some jumps on the trails!! ! 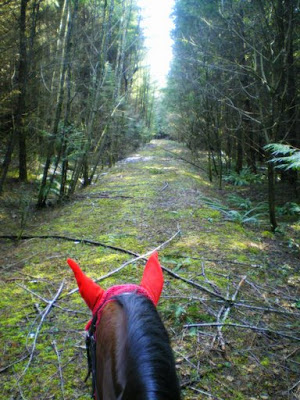 I cleared some of the roadway then made three jumps with what I could find. I spaced them out for one canter stride in between. The first one had red tape wrapped as a jump pole before the jump. It seemed to help her with the timing. It was sooo awesome! I was smiling the whole time having found this perfect area. 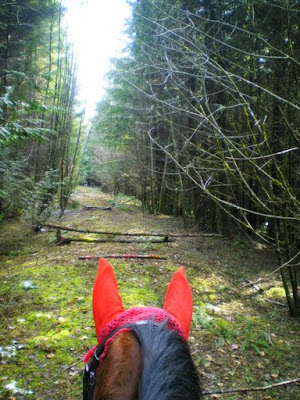 So I did the long loop again, the road was in the middle of that. Then on the way home after clearing one part of a new trail-tome- I found another shorter loop through the forest! 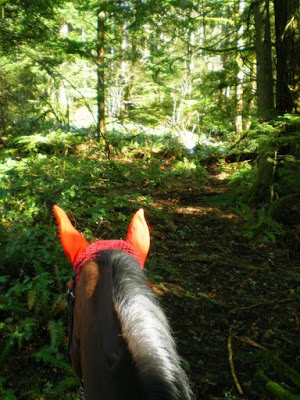 Twas a great day all in all...some nervous behaviour in an area that she was before...so it will be like that probably always..she seems to dislike certain things like-close in greenery of a canopy overhead. Nothing awful just antsy.
The start of the ride was a bit tense though...before we left the driveway. I got on and realized...I had no helmet on or gloves..felt naked and she felt like an explosion waiting to go off! We sidestepped over the the trailer- 4 times -before she'd stand for me to reach the helmet bag.
I booted her all fours today with "Old mac's G-2's" So I may trot and canter on the little bit of roadway take(right now) to get where we go. There are about 4 other trails that I think may lead us to the same places but...another day. But booting her takes away my handicap...tender toes on gravel...so she was just wanting to MOVE!!!! She had 2 days off and it does built up in her.
I am so relieved that I feel so at ease with her care enough to take times off...It is such a blessing to know she is in the best hands now! My PBO is just awesome ...the way a Prof should be with her word being like GOLD. I missed that somehow, in my last situation.
So..what happened after I took her cooler off tonight gave me thoughts of our friend Lisa.
I popped up to hang my cooler and came down really wrong on my right ankle...pop-pop-pop it went ripping.
I almost passed out..then thew up!
I called my Friend, who just took off to walk home..she came right back! I got Arnica cream on it and took homeopathic Arnica too...then 2 Advil and she drov me up to the house and we vet wrapped ice to it for an hour before I drove, left footed, home.
I am iced adviled and beered up right now..not feeling too bad.
Supposed to ride tomorrow with Gem...hummm well see...it hurt pretty bad and is black and blue.
Me out for now...
Posted by allhorsestuff at Wednesday, March 11, 2009