OUR JOURNEY
~ from barefoot to hoof boots to EASYWALKER horseshoes.
The TB mare has pretty tough hooves for her breed. It
could have alot to do with she was bred for stability. Her TB Dam was sound and never raced , her Sire was raced but retired early. He was solid. My mare has never raced and has been fed a low sugar, moderate protein diet. She has only had STEEL shoes once in her life at age  3, just to have had the experience and to be well behaved for professionals.

The first few years we rode mostly in arenas....nicely manicured and soft footings from sand to hogs fuel and some just plain dirt.

.... but we would venture out to trails with some "Easyboot Epics" on the fronts for the rocked footing of the horse parks near us. They worked okay...unless we trotted . What a pain they were...cables and gaiters and OH, what a pain they were!! We did that for a year or so  till, she completely ripped them off, everytime we went out!

I then tried the "Easyboot Boa's" . They stayed on but were CLUNKY..then that cable broke..and I tried to replace it to save money..and my husband tried too..NOPE, out they went. Then I tried "Old MAC G-2's"- Another clunky boot that would get wet in our Oregon Mud, stretch, then  twist .  Once the mare tripped, because of them and fell on me coming up a very uneven trail. OUT they went!!
Beach riding is about the most perfect place on earth for barefooted horses...but I can only do that maybe twice a year. Plus, if I wish to ride the Bay side of the places we go to at the ocean..that requires boots too!

So basically, our riding terrains call for Hoof boots rains making for softer grounds we have in Oregon. They make for softer hooves when we go to the trails and  graveled forestry service roads- we have to ride upon here- in abundance. These rocks are more like small boulders, and it is necessary to protect the hooves.

LAST YEAR~ 2010~ I found Sydney at "Bitlesshorseblog" and she introduced to me another alternative alternative method to boots. "EASYWALKER" horse shoes. They are made of a shock aborbing Co-Polymer material that flexes and concusses-almost as much as a natural hoof would. It is the closest thing to natural I have found for the health of the hoof and leg of the horse. PLUS...they don't slip on pavement. I like that.

THIS YEAR~2011
After trying the shoes out and liking them so very much for the riding I do, I wanted to have a BASE LINE in Thermography done for the mare before I reapply the E.W. horse shoes. I also wanted to see if there was anything to know about my hoof boots.

My mare seemed be be telling me about them.
Every so often I would catch her grunting going down hills(with the protective boots on) or she would do a "Stringhalt" walk, in the hinds.

The THERMOGRAPHY done after only 2 rides with the latest hoof boots I found to try- "CAVALLO SPORT"- the results of them on the mare...not good at all, and damage would ensue if I continued to apply them to Wa's hooves. I felt terrible that it was this bad!!
Below are the results. My image is NOT as defined as the real image..I took the photo of my Equine Therapist's camera's view.
RED HOT TRAUMA...is what we saw from the hoof boots!
Need I say..OUT these go too!!!

I have contacted the Cavallo folks describing my results..the owner did write to me, and today she is to call and we will discuss what the Thermography findings were, and the mare's obvious discomfort wearing them. I am also happy to report- my investment of $126.000 will be refunded by the Co. ! ****Though this result may not be the same outcome for you and your horse
Please be careful of Hoof boots that extend above the hoof!!!

One thing I credit  the EASYBOOT folks for is that they are accountable to list "mileage" that  any given boot is suggested to worn for...because of these problems of restraining the horses natural movement and gait with the taller boots- being restrictive in design.
The trauma to my mare was  not only at my mare's fetlock/back pastern area, it was in the front of her leg as well, in the muscles that lift her toe. I am so happy I have a Qualified person to help me discover  I may have injured my horse-unknowingly!!
Of my entire mare's body...this was the only RED HOT place. She would not allow us to touch it. 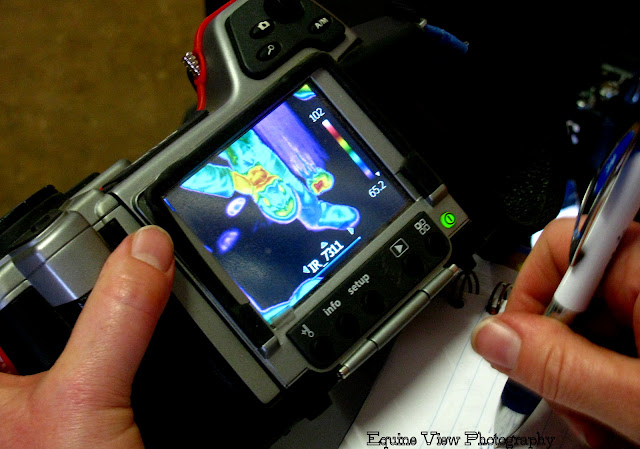 I have been cold hosing and applying cooling therapies to the mare all week...she seems to be healing and regaining a normal stride.
She was very sore, while wearing the boots the day before on the second walking ride..to the point of lifting her legs unnaturally so.  I had to take the boots off midway through he ride and strap them to the breast collar, to ride with me homeward. 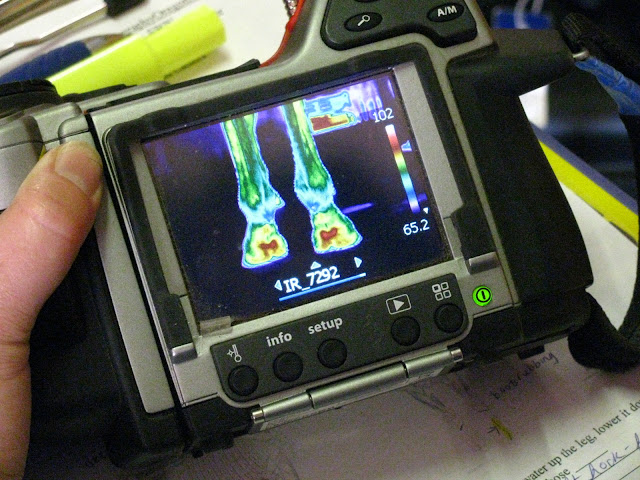 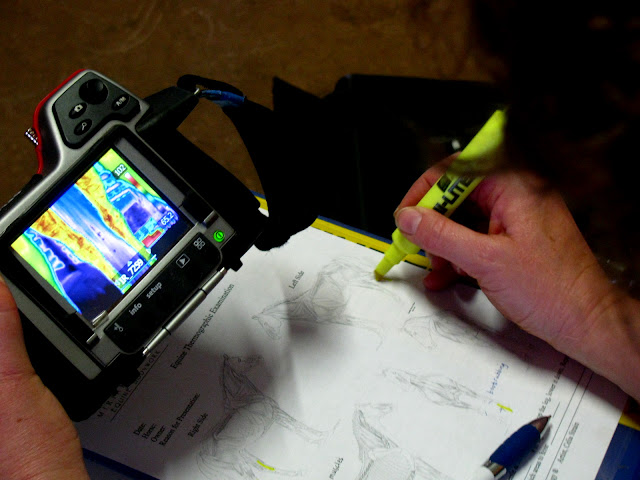 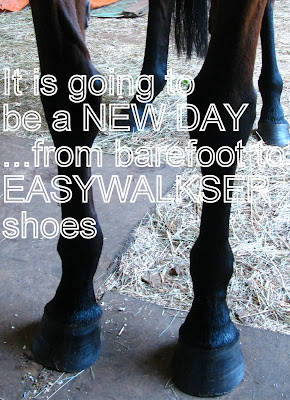 I normally  have to make sure that the hoof boots have not twisted, or flown off. They are too expensive to loose! And not to mention...having to pick and choose where I ride as to the depth of mudd,  and or steepness of the hills. No traction with the hoof boots. 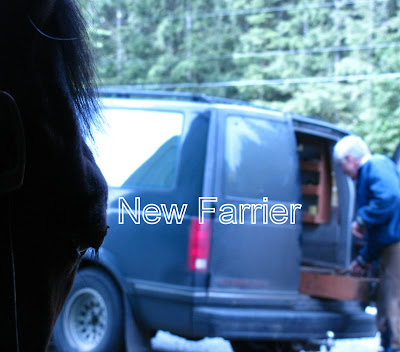 AND...untill today...I did not realize how upsetting and bothersome the boots had become to my mare too...her slipping and groaning, and balking at hills....always pensive. 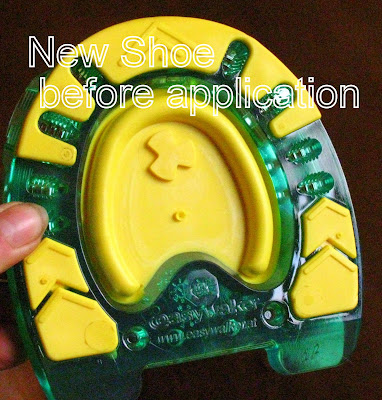 Today, it was so different! 1 day after the EASY WALKER HORSE SHOES application. We strode familar sloppy trails..and my mare was NOT apprehensive! That was HUGE!


I now look at the pile of OLD Boots I own ...much stock in Easy boots(that were NOT easy!) and Old macs-EB Boa's....Cavallo's...
You can say the past 4 years have been me trying my darnedest to remain- barefooted- and fancy- free. 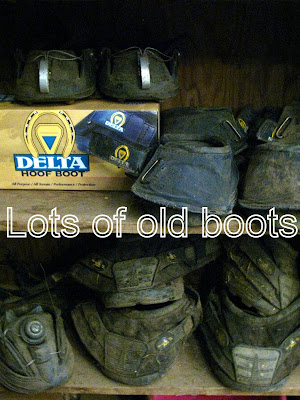 Well , that was not really it for us...though-for a TB- she has excellent hooves!
My new Farrier dude took hoof caliper testers to her hooves...to make sure she was not tender and to get a read out on her personally.
He was well pleased, and noted that she had excellent heals and  good concavity . 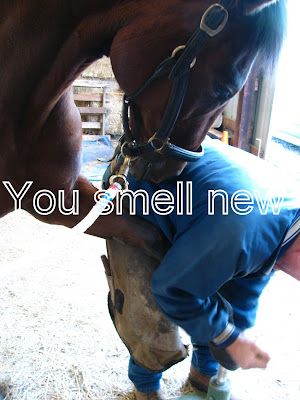 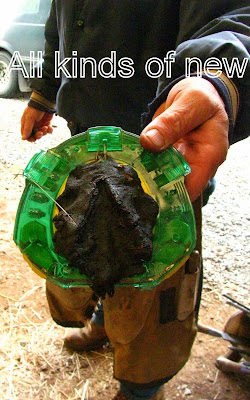 The mare took to the new shoes and walked confidently upon her gravel paddock. 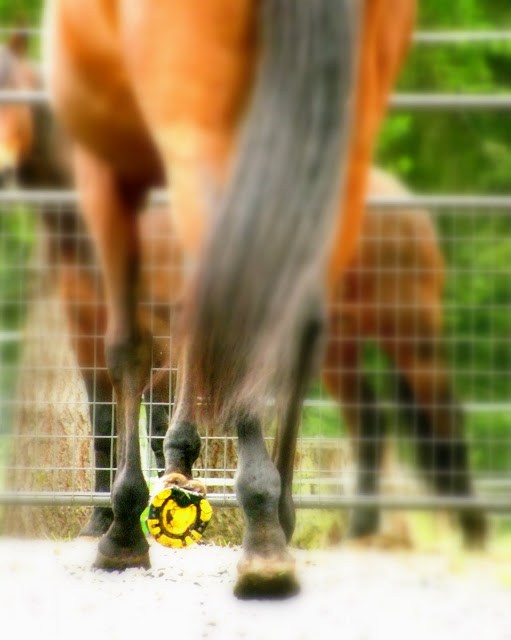 FUN stuff that I have not been able to do at all with my hoof boots...is what We did together Yesterday....

I had my NEW GOODE RIDER Couture Jean Breeches on, and we went for a spin....... 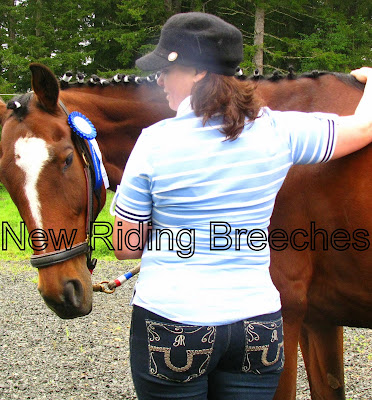 See VIDEO Posts below~
Posted by allhorsestuff at Monday, May 24, 2010