Sunday at the Stables "Presence" 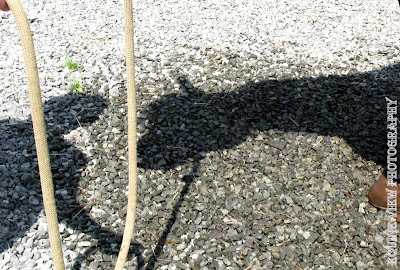 It was a very good day to be at the stable with my friend Jo....weather was springlike...cause it IS SPRING here finally!
Danny was willing and able today. We started with the water treatment first..to remove some caked mud from his hooves and legs. When I started this desensitizing with the hose and water earlier in the spring, I used treats. Now I use the click noise only- he is so mob-you-for-the-treat--it is time to stop that part of the routine, and just praise him as reward, sometimes a nice rub.

He did excellent for Jo! 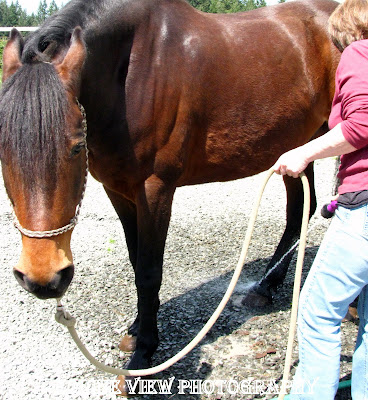 I did not mention this before, but,  4 weeks ago, after our loop ride into the hills - Dan has been recoving from an injury he sustained during the last bit of that ride. The trails were very sloppy on the way home...slick and sloppy. I had  failed to wrap his legs. I never forget to wrap my mares legs..and I felt like= terrible!
He hit  one his splint bone and was lame the next day...I taught my  PBO ( and retaught myself) how and why to apply standing wraps. We also cold hosed on and off for a week.
The injury changed and became almost unnoticeable, shortly after a few days.Thank GOD!
Dan  also has been paddock bound for 3 weeks, and we recently started to do walking rides again, and regular turnout.
He appears to be fit and ready to go ...I will NEVER ride another horse without brushing boots again!
The classic...if it could happen -it WILL happen -( to me)!!!

She picked his packed feet...and not smelling too good, we gave him and anti fungal spray treatment after.
Horses with shoes...the mud and stuff get so packed. I never  have had that with the barefoot hoof. 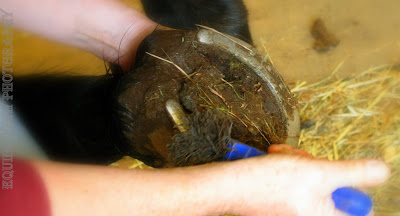 We then  went outdoors for a bit of ground work...I knew Dan would be all excited to get his FACE TO THE GROUND, and try to eat any thing green! I warned Jo about this.
She would have to have  the"Presence" of a leader with Dan, to keep his attention and head off the ground.

He was excellent for me. So I know he can pay attention to her too. He only tried once for the ground.  I stomped my foot while applying a small upward tug on his Caveson-saying, "head up"..smart Danny boy...got it and looked at me  intently!(photo below)
Next time, I only stomped with the "head up" command. After that-
just said "Head up". I know you could go the other way with that lesson.

Waiting for the next directive! 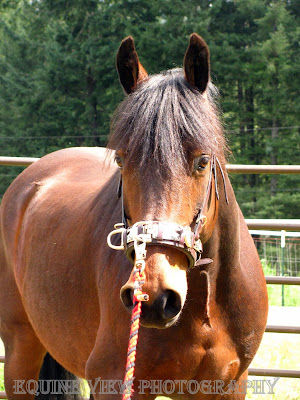 I began first with him, since he really has had no formal training in lunging- aside from my PBO's former trainer .
This former trainer choose to use "natural horsemanship" tactics, over basic traditional lunging rules...and now, I am dealing with Dan always stopping to face me for directions and coming in on the circle. He is a smart cookie though.  Sometimes he acts like he is afraid and leaps to the trot..always the trot...not liking to walk..but repetition, in a lowered tone, "And -Waaallkk" and contact with the Caveson in a backward circle...he caught on..really fast!."Oh, she REALLY DOES WANT WALK!"

Jo watched and then took over. Getting the lunge rope line set up( I have a problem too, with all of it!) and whip working and right and left hands doing this, that and the other...very confusing at first. She did really well and Dan was full of grace with her.
I decided to tell Jo, the hand holding the lunge rope or line is the DIRECTIONAL + WHOA hand...and the whip hand is the GO hand. So she uses the same hands for the same cues each time. 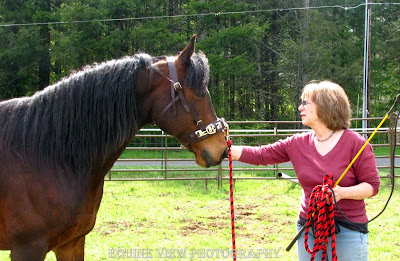 She did have a little teeny lack of presence, at first, and Dan was looking for the snack..in his body language...it was about to happen here. 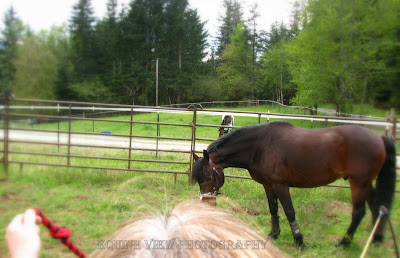 The contact was lost with the Caveson and horse..as she tried to lift her arms to get it back...much like getting caught with having a too long a rein while riding  and pulling your arms up and back the your chest.
Like I said, all the equipment was like juggling at first, and I too do a juggling act sometimes.

My sister never allows the rope or line, touch the ground...she is great about it..I am still working on it..it is all in the correct technique! And it is a matter of safety with the longer lines not to get looped around legs and feet.

We worked for a while at this, then I had her work on simple commands he had been taught in the natural horsemanship language...The yo-yo game. He is really good at it...really listens and watches...ready to please her!
"Wait Danny" 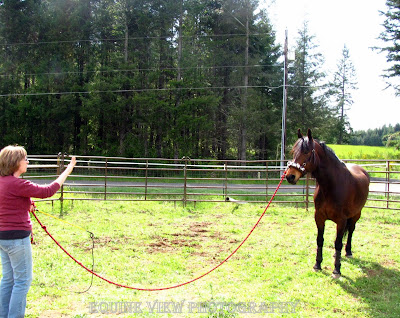 Then, after he had walked on and around, halted again, she gestured....he then came in to her. 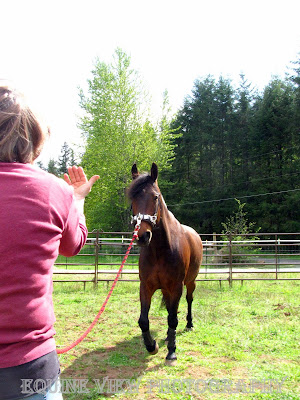 I was trained traditionally so...and the horse stands on the circle and waits for me to approach or to ask them for "Reverse".
Wa mare waits and does a turn on the haunches, to reverse, from the wall of the circle. One side is always a bit better than the other..but that is normal.
I plan on doing much more work with DAN, to get him to relax and stay to the outside of the circle...for when I lunge her on him, I wish him to remain on the circle, and no turning!

It was an excellent day to be doing ground work! We all had a good time! 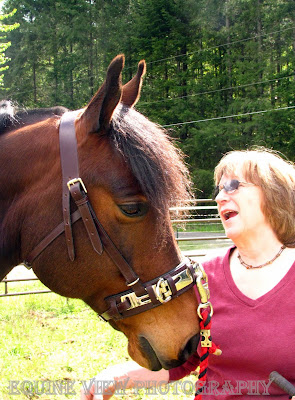 We went on back inside to put him away and give him something special. 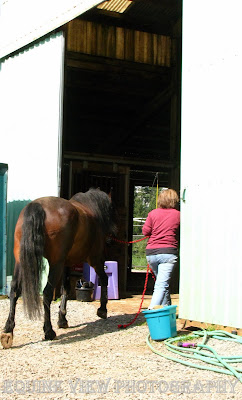 After just a day of treats last time by hand...he got wayyy too- too mouthy. So no-more that way!
Jo said her  thankful Lovin's to him . . . . 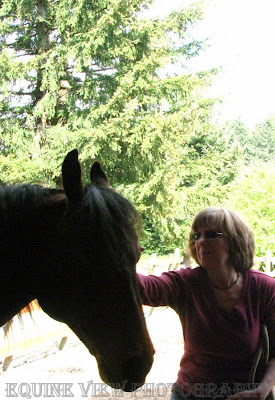 Then she tossed an apple to the ground 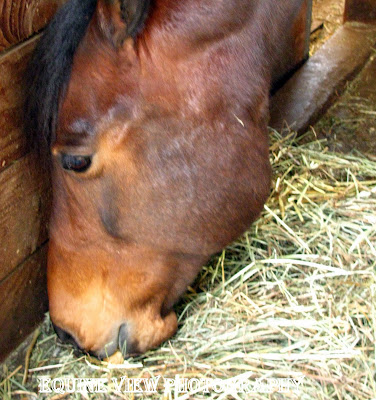 Danny Boy said, with slobber on the lip,
"THANKS JO! LEARNING NEW THINGS WITH YOU IS GREAT...tastes pretty good too! 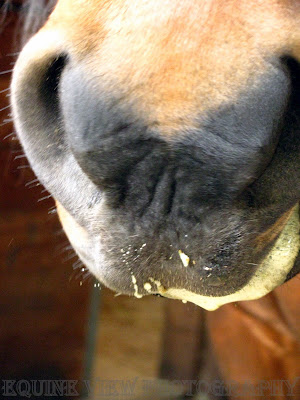 Email ThisBlogThis!Share to TwitterShare to FacebookShare to Pinterest
Labels: Sunday at the Stables wk 2