Sundays at the Stable ~ first meeting 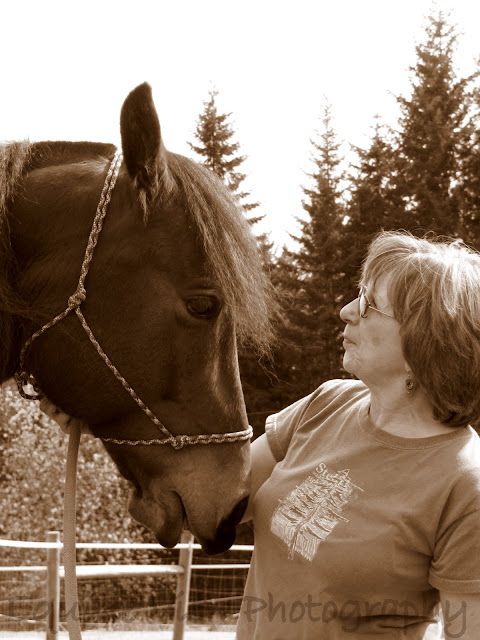 Meet my friend Jo as she meets Danny Boy.
We have agreed to meet on Sundays, after church, for a Stable day of grooming/ cleaning/ maintenance... and eventually riding!
She and I have known each other for years ( like 22) and though she has not spoken much about her early days of  horse back riding ere now...she began to talk more & ask me questions about doing so and lessons.
Her interest peaked after her good friend got a horse recently. So, I offered to give her a start and hand her off to a professional when ever she needed .
I have always wanted to offer some sweet horsey days- life- relief- to someone else...but some of the stable's would not allow me to share the fun...too paranoid, or a trainer thought I was infringing their territory.
My friend has signed the release and I am being very careful, trying to help her learn good judgment and proper care around these rather large, and sometimes, unpredictable equine animals. I have worked with this Horse  in particular, for a year now.
She began by allowing the stress of the week to transfer out...touching Danny's hide...while His apparent non- stressed lifestyle of rolling in the mud and hay, equally transferred on over to JO! 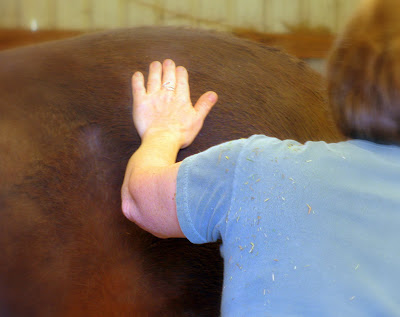 She groomed and groomed...creating much dust!
I taught her the Pony club method of cleaning your brushes as you groom the horse.
Brush with the stronger curry first, then brush the same area with the softer brush. As you do so, use the stronger curry on the  second brush itself inbetween, effectively cleaning it too...and begin again.
That way you don't keep transferring the dirt  right back onto the horse, and end up with a cleaner brush as well.
One of these Sundays...we'll go ahead and wash the entire brush collection too. 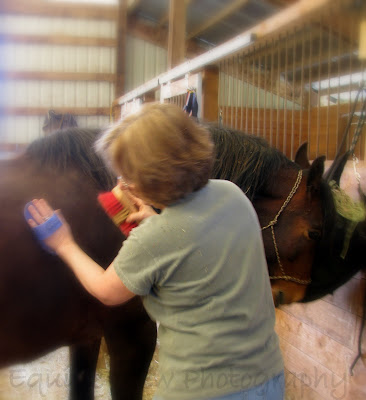 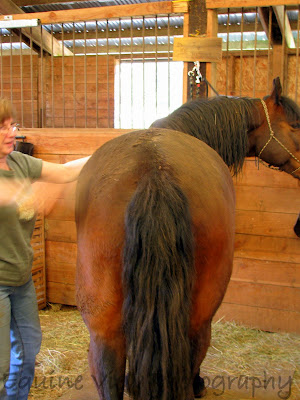 After we got the mud and dirt off him...as much as we could- with out a bath that is...we went on outside to wash his mane and tail...they were quite encrusted. He has more mane and tail than any horse I know!
Now, I must tell you that this horse was freaked out last year by just the sight of the hose...let alone turning the water on! His owner and I worked and worked with him...firstly by having the hose around all the time, then turning it on and just standing there, till he calmed down. He eventually allowed us to wash his feet and then legs and body...so, as the weather has gotten nicer and I have been riding him...I thought to use a treat and my own version of the clicker(my mouth noise) and he instantly perks up and forgets to be afraid!
Though...he loves treats soo much- he is wayyyy to mouthy! So less treats and more praise now works well too.
I did his feet first..to acclimate him to the water..then Jo took over, as I held him.
I advised her to be aware of his eye and body stance. Also being careful of the drips..sometimes drips are bothersome and stomping or a random kick, I have seen...even with my mare. I told her to stay close to the body..so as a  leg at full speed, would not get her if they did kick.. just the  foiled, less lethal coiled version.
Awe, he put his neck down for her! 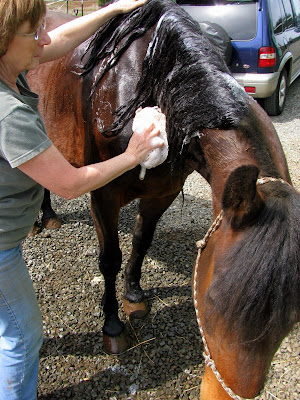 He frequently looked around to check in with her too...I love this horse! 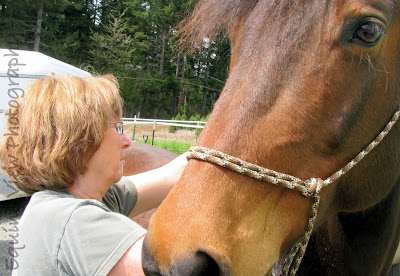 She moved slowly and carefully back to his tail~ 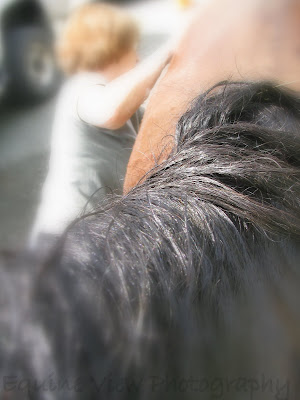 He moved- not an inch...good Dan man. 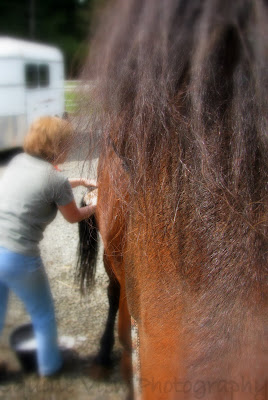 Then the rinsing..he was excellent for both the mane and tail for Jo~ 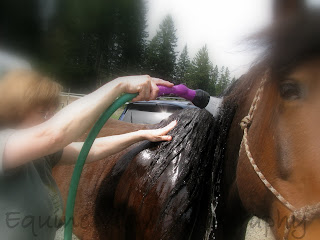 She then took him back into the barn for a comb out...I told her how vital it was that she use a bit of conditioner first...then a LARGE and WIDE toothed comb, starting at the bottom. Having gone to beauty school( where we met some 22 years ago)...she got it. The goal-no hair loss- by breakage!
That took her awhile! I was tending to my mare and also unhooking the trailer from a ride my PBO went on the day before.
The finished product was a very happy Danny Boy and equally satisfied Jo! 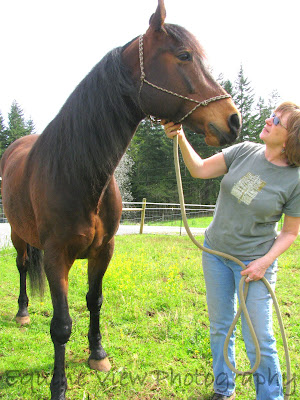 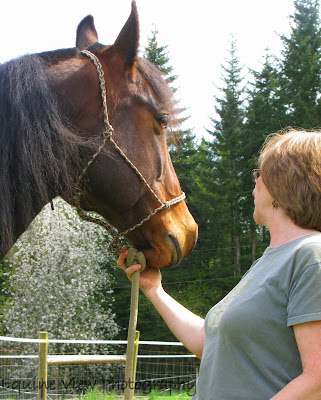 After they both looked on for a time...we set him free to roll again..but he  seemed to honor Jo and just tried to graze some sparsely sprouting foliage!
Until next Sunday....dreaming of horses and the charm they have in our hearts~ Sleep and dream well Jo!
Danny Boy awaits to help unlock hidden treasures of the soul~ 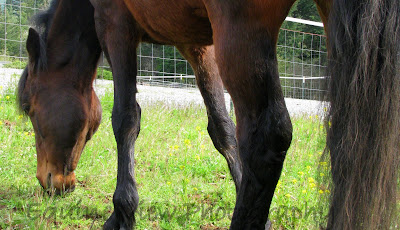 Email ThisBlogThis!Share to TwitterShare to FacebookShare to Pinterest
Labels: Jo's first day at the stable