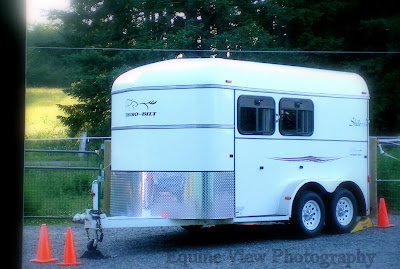 I have had my "Thuro-Bilt" trailer for a year now. I like it alot , though I would not have picked this model out myself, given the choice of one main thing---Solid wall or removable wall.
While I like the fact I may take the wall out, and the one slant stall divider out, to make this trailer more of a "Stock" Trailer-
When left in, and that is my normal mode, you have a tack room (and I NEED a tack room!)  being the prepared gal I am.
Now-THIS IS THE PART I DISLIKE- When you leave the trailer to go for your ride; often by the side of the road or public park, you must lock, (to keep your gear and belongings in the tack room)- the windows/tack door/  Back trailer door -every stinkin' time you leave your rig!!
While I am known for my organised
methods and order...it takes much effort to rally yourself, after you saddled up and the horse is ready to go......take the pins out of the tack door and back trailer door, then get both the locks and then do the windows...um, did I do the windows? And where are the KEYS!
Actually, I have gotten proficient at his now~
Last Summer, I had my first camping trip with the rig.
My sweet new friend who owns Mustangs, had invited me to join a group of folks up at Mount Hood, a place I had not ridden before.
I washed the trailer- inside and out...sparking clean, knowing I was to sleep in there. I had an air mattress, cedar shavings(smelling good) under that,  Screened windows (no bugs). Lanterns chair... All  the fixin's for a comfy couple of nights. 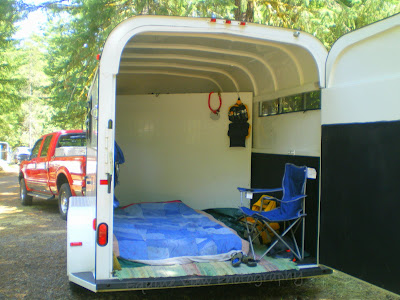 It was GREAT! And I have had NO problems with my mare in this trailer at all.
Since the wall is removable though...I took silicone gel and went along the bottom edge(THICKLY SO) with it, to seal  off any debris or urine from coming under the wall, into the tack room. FORTUNATELY..my mare has never pee'd in a trailer!
So...the problem arose not with my horse...but My PBO's gelding, Romeo, that likes to look all around and sticks his head over the  dividable wall. He is taller than any horse I have had inside my trailer..and he also thinks "treats" may be lurking just around every corner!
This apparently is a problem with her 3 horse -removable wall- trailer too- with him-.
She has had this trailer, a stock  "Morgan Built" , for almost 2 decades. Early on, she had to have a friend WELD a "blockade bar" at the top of the wall.
If you look at where a head would pop over to check things out, (looking for treats)...you can clearly imagine the  problem that may arise!
HORSE"S HALTER GETS HOOKED ON THE BRIDLE PEGS! 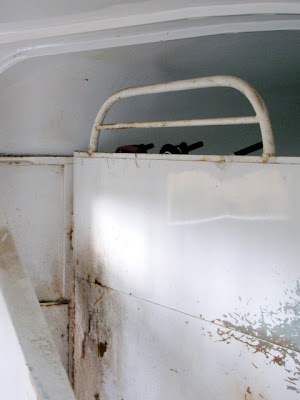 This welded add on keeps that from happening in HER trailer.
Mine...is only a few years old and It took ROMEO to prove to us that I needed to get that welder dude to hook me up with That bar safety feature too!
This is my front stall in the Thuro-Bilt trailer-
See the scratches in the paint? And the hook nearby?(NOT even as close as her pegs...they are recessed back)


-IMAGINE A STRUGGLE-
Romeo had to really tweak himself to reach this!


(I require others that trailer with me in MY rigs, to use safety halters that break!) 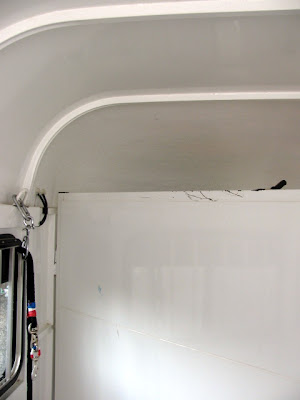 Romeo's halter DID break, and we felt nothing from the struggle to alert us as we drove along  home, from the beach last month.
We simply got him out upon arriving home, and his owner noticed the leather halter had broken at the clasp under his chin.

This just occurred to me; Just as you groom and study your horse's legs and body before a ride , and....after the ride, as you do a one over- YOU may find INJURY faster this way and establish -a base line for health and normalcy, your horse as well.
I clean my trailer after each use( My sissy's influence again) with White Vinegar in a spray bottle, Using a dry towel. This eliminates lingering bacteria . You may also use it inside your hoof boots or leg wraps/saddle pads for the same, as it is non irritating and cuts odor as well, for a quick fix. ( NOT a substitute for washing porous material)
Doing this clean up job that day, is when I noticed the fresh scratches in the paint and put 2 and 2 together with the broken halter and peg.


So, the next ride we went on together with Romes and Wa mare-CTRF Hardy Creek- Before we loaded Romes, I remembered to ask if he had his safety halter on? Nope...waiting for another in the mail... So Wa mare had to go in first. Which can present a problem.
Hence the Trailer Debacle of that day I referred to in that post .
Wa mare is a very opinionated girl, she has personal space issues, and horses coming in behind her in the trailer..she takes offence to. I, for obvious safety reasons, normally load her lastly and all does go well.( A GREAT REASON TO USE Padded Leg hauling Wraps too!)


Well, coming home.vs going out to the ride...she decided to squeal and kick when my PBO tried to load Romeo behind her...she was in the trailer and suddenly said,"Here-YOU have more influence over her- YOU load him!" (hence the debacle-I influenced her with the training stick touching her  neck as I told her to "Easy!")


We are looking out for you Romeo! (who is looking after me?!) 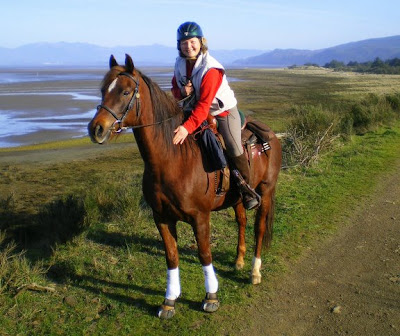 Calling the welder dude now!
Posted by allhorsestuff at Thursday, May 13, 2010