A girl and her Horse interrupted 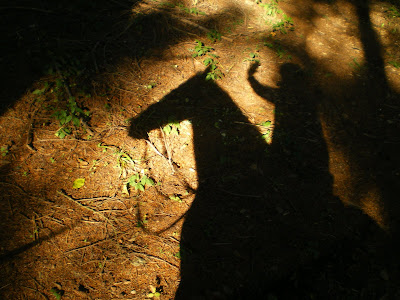 The weather was glorious and though I had to work in the morning, I got to go out to the stable midday to ride in the sun!

I did not hear the motorcycles, so I felt good about going just off property.
Here I am waving at you all from the top of our entry to the forest trails. It is kinda steep.

I was grooming Wa and thought to let her mane out for the ride. It literally has been 2 mo since I have let it out, for any amount of time save, brushing it clean and rebraiding it again. She is a MUD PLANTER...she loves to plant mostly her neck and face in it ofter times giving herself the appearance of even having eyeliner. 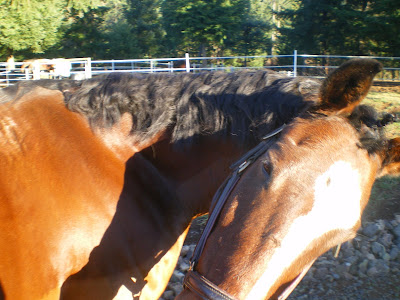 She Thought I was giving her a carrot for stretching to me...and I was just trying to get a shot of her longer mane!

Eventually, I wish to braid it in a running braid for events...maybe in our future.

I kept looking down and thinking...wow she looks different! 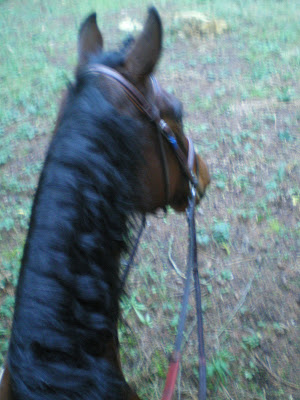 A new Hairstyle does change everything..I should know!
Notice: I have two sets of Reins attached to the bit. I thought to use a non- evasive training measure for her to have some weight on the bit appart from my contact. The other night in the arena with the draw reins attached and me not using them seemed to be possitve for her.
I do think she responded well, even for a trail ride she remained lower and longer.
So, before we got off the first trail, I realised the motorcycles had been racing around there earlier than I could hear. They had left their skid marks up and down not only the main trails...but..OH! The trails I made to get reprieve =from them!!!


I got off to rearrange the logs brantches and such I have placed to discourage them and make it more interesting to go over for us...and....I heard them comming back.....
I could tell there were many this day, out in force. I was pretty far up into the thicket and OH MAN>>>>they were coming up here again!
But not even on a trail at all...just wildly spinning thier wheels in the thick underbrush making noises and messes, coming right for me. Well, I am glad I was off! My mare really thought today was her day to go...well go somewhere!
She squirmed at the end of my reins.
I had my Whistle on and My Bright Orange Vest on..My Mace was hanging on my neck and...they still came ...not even looking up!

I Whistled...I waved...I then started to pick up the biggest branch I could to throw in front of the first biker. He finally noticed me standing there with A large branch like a cave woman! I put my hand up...and finally made the CUT ENGINES motion- slit across my throat -several times before he finally lead the others into doing the same.

I was riled up having them invade this area that is well marked "NO Trespassing with Motorised Vehicles" at the top of a list of things prohibited in that wood not but 500 or feet away from us!

I stuttered off, " This is Private Property , and I have the Authority vested in me by Beavercreek Port Blakeley managed Lands -through Lance Christensen- to advise you to cease riding here, take names and License numbers, to report you here.".....
Stunned and confused they were..and as I stood there waiting for response...I realised that I almost said "I have the power vested in my vest"...cause I took it off to wave it at them as they headed straight for me!

They simply said, "we'd rather leave". I told them not to come onto the trails and woods but stick to the roads. They all left and did not come back!
Whew..............
I had a fabulous ride and we even got a hand gallop in. I can't really let her out though anywhere,,not enough room to stop I fear! Only The beach is made for galloping.

Interruption abated, the ride was awesome in the cool sunny day...and the ending was the best.
Taking the mare to cool off with this view !!! 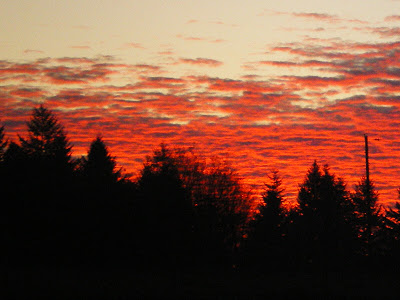 Posted by allhorsestuff at Sunday, December 07, 2008

Email ThisBlogThis!Share to TwitterShare to FacebookShare to Pinterest
Labels: Sunset with the mare