Whew'...
been running around doing tasks and errands for friends. I videoed a 3 day clinic last weekend for my friend at the stable. It was a first for She and her mare here . 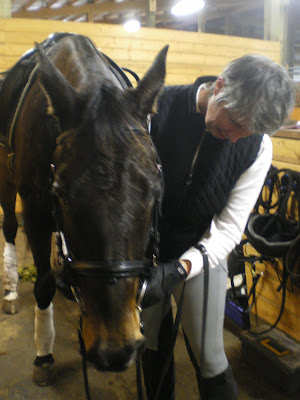 So since It was her first time in a clinic and she was so helpful to me my first time riding in one, that I was honored to do anything for her. Having a video to watch after the fact is so helpful and informative.
But since then, I have been trying to figure out why the computer won't download them so I may get them off the camera disk and to my friend! Arrg! I have spent all my time doing this almost every night.
Then my first day off that I could actually ride in the aren, Monday....I got roped into trailering a horse( someone at the barn rode it on trial basis) back to it's field -90 miles away. Fortunately-I got paid handsomely for this task and will put the $ towards paying my sister for the use of her truck and trailer next mo. She has informed me that things are changing. 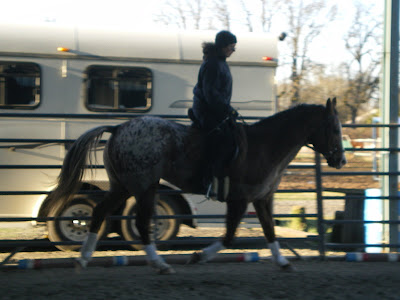 We have come to an arrangement. My sister is taking her horse Pantz back to the coast, where she lives, to have a horse to ride again.I will keep the truck and trailer here since I don't think I can be without it...I will pay half the payments and all the maintinence. It is more than fair since I have not had to pay for a whole year!

I have had her mare and truck and trailer for a year exactly, since her stable closed and she was forced to make the decision to have her stabled with me up here in the Portland area. I know she was relieved, for a time, to not have to drive 35-4o minutes after work at 9pm to see her and not be able to even ride because the arena would flood in the winter. But now, there is an opening at an actual boarding facility near Newport Oregon and she has missed having her horse to ride. They offer all kinds of clinics with varied dressage instructors from California and such, so she is very excited to get back with pursuing her passion. She may even talk me into coming there for some clinics and I will get to ride and stay with her. I am looking forward to that future.
Soooo, Monday after I drove and drove till about 1pm...and being stiff still from my farrier job and Wa, I considered not riding at all....but knew I needed to ride in the arena sometime before my Lesson Thursday. I made my feed packets , did my stalls, had to go get somethings in town, came back and of course it was dark then....and so I took my lantern on out to the pasture and brought Wa on in and cleaned her up. There was NO-ONE there and it was heavenly to have it so quiet! We had the nicest rides in the arena since I have been at this facility. I used the patterns I learned from the Clinic I taped. The arena had a secondary inside wall made of polls in 3 - 20 meter circles. So the arena was divided into 3 parts. Then on those 3 parts you could make 10 meter circles,changing diagonal, then come back to the original diagonal after that.
I do believe it made her think alot. I walked the patterns 4 or 5 times before I even considered trotting them since her offense with me lately- has been trotting. And after watching Jane Savoie '"Dressage mentor" video clip online earlier that day, I used another technique to free up my torso on circles, so as not to block Wa in any way. I held the reins in one hand(outside) and the inside arm I reached behind my small of the back to grab my elbow. Resistance means wrong posture and bend in the rider...once you have done it, you pick up the reins again for a few strides, then once again, try again. If your arm slides into the the same position without resistance, you achieved it and your shoulders and hips are traveling parallel to the horse's , like they are supposed to be on a circle. I also do a Sally Swift move sometimes...trotting, I raise my inside arm straight up into the air as I hold the reins in the outside hand, that also frees up your shoulders making your mid chest face the horse's track in which they travel. It also helps with balance and an independent seat.
All in all Washashe liked the exercises and the fact I did not look at her. She always knows when I am and she totally reacts to me doing so...it must stop my body somehow. My sister told me to look where you wish the horse to travel..so I guess if I am looking at her..it may be weird! and when someone actually came into the arena..I did not look a them either..in fact I made a new 10 meter circle pattern and she nor I had time to focus on anything else, as I used my inside leg to connect to her outside shoulder. It was GOOOOD!
I feel we redeemed the arena a positive place to go and ride!!!
Then this morning, I finally got the dishes done and counters cleared...over 24 hours after I said to a fellow blogger that was having similar household chore accountability issues , I would do that the next Am. Then, ran into the day...without a second thought to doing it! 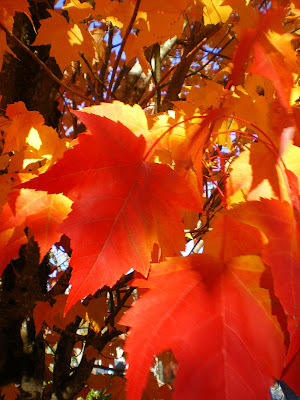 SOoooo though I watched others ride this weekend and really wanted to also..I was banned to the greater outdoors ...oh darn!!! It was very nice and one day, very Misty..we went to our favorite tree grove..full of lanes and alleys to ride up through and around.These beauties are still out there..In December!
Tomorrow is our jumping lesson...probably want to work the flat and ground polls and Cavallettis a time or two. We shall see!
Posted by allhorsestuff at Wednesday, December 03, 2008